Recently my husband and I were able to watch Akira Kurosawa's The Hidden Fortress during one of Hulu's “free” nights, and I found myself once again entranced by this delightful tale.

I've seen it perhaps 5 times in my life. The first time was in a revival theater, the Valley Art. I was around 19 years old, and the other people in the audience were mostly college students. As much as I liked seeing it on my 28-inch screen at home, it's a powerful experience on the big screen – so much so that, although the movie was filmed in black & white, I remember parts of it in color. Most of it was filmed at real, outdoor locations, but I suspect parts were filmed in a studio, on lovingly detailed sets. Cecil B. DeMille's got nothing on Kurosawa when it comes to gorgeous spectacle. Another thing that impresses me is the number of extras in the movie. It doesn't boast “a cast of thousands," but there are sometimes a few hundred people on the screen, yet the main characters never get lost in all that action. The big star in the film is Toshiro Mifune, who plays the stoic samurai character, General Rokurota Makabe, with aplomb. When he wears a mustache and beard, he looks just like the paintings of samurai on silk screens, or like the masks in Japanese theater. He's wonderful, but he's made more so by the character who steals the movie: Princess Yuki. She is the reason I keep wanting to see this movie. She is extraordinarily beautiful, as you pretty much expect a princess to be, but it's actually her imperious-yet-socially-awkward personality that steals my heart. She is the only child of Lord Akizuki, and the sole survivor from an old and noble family. Because she had no brother, her father raised her to lead the clan. She is fearless and utterly imperial, well-trained in the art of giving orders that must be obeyed. These are traits that inspire devotion and unquestioning loyalty in the handful of servants that survived the massacre of her kin. She accepts this loyalty. But she is compassionate too – a trait she must wrestle with if she wants to re-establish her clan.

You might think Yuki and Rokurota are the glue that hold this movie together, but that distinction goes to a couple of viewpoint characters, the comical (but not always likeable) Tahei and Matashichi, a couple of peasants who went to war in order to get rich. This is not a scheme that works out for them, and things go from bad to worse in the first five minutes of the film. From that point forward, these two knuckleheads fall into one disaster after another. Their own greed and moral ambiguities drive them to keep making mistakes, but those are the traits Rokurota finds the most useful as he tricks them into helping him and Yuki move the gold that belongs to the shattered Clan Akizuki to safety.

Along the way, Yuki insists on rescuing a slave girl, an act of compassion that seems too soft-hearted at first, until this same girl manages to save the day several times. Can this band of misfits get the gold to safety so Yuki can rebuild her clan? The odds are stacked against them, but they still have some tricks up their sleeves.

Each time I watch this movie, I notice something different. This time it was the fact that the hidden fortress sits in the middle of an odd and other-worldly deposit of what appears to be volcanic tuff. I can't help wondering if this site survives intact in modern Japan. I hope it does. It was part of the magic of this movie, one detail in a long list of wondrous sights and sounds. 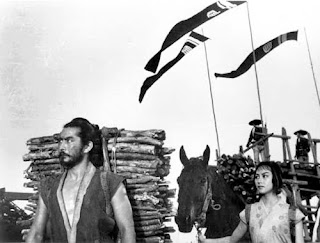 I love The Hidden Fortress. Princess Yuki has won my devotion, too.
Posted by Emily Devenport at 8:53 AM