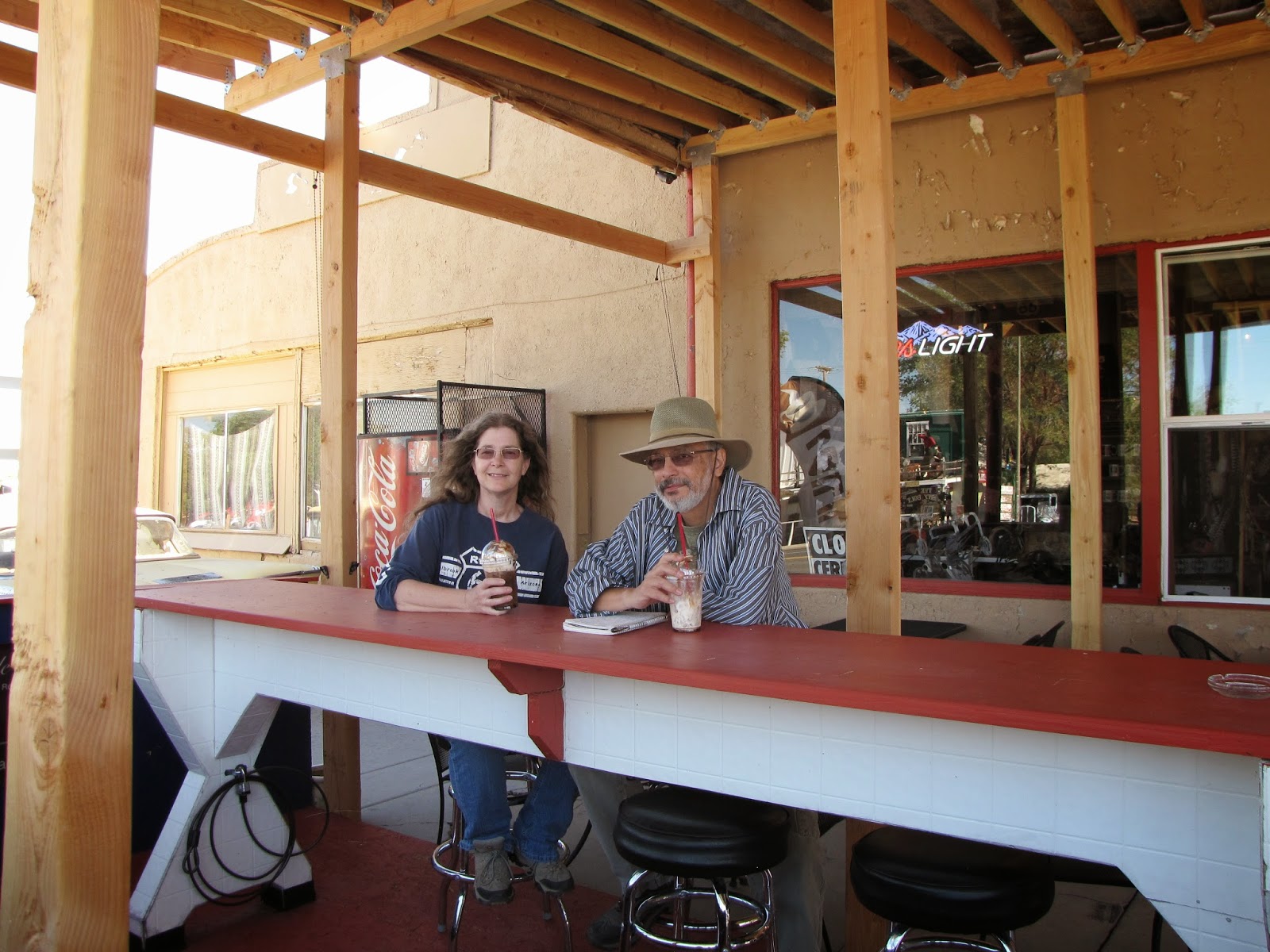 Arizona is a big place: 113,998 square miles (295,254 square km), so maybe it's no big surprise that there are many places in AZ I've never visited. The difficulty of the situation is compounded by the fact that this big place is very mountainous, and there's a giant, canyon stretching across the top NW corner of it. The interstate highways transect the top third (I-40) and the bottom half (I-10), and those two highways are connected in the middle by I-17. But that still leaves a big part of the state that must be explored by old highways and unpaved roads. And gas is currently running between $3.50 and $4.10 a gallon, here. Before you wince at how cheap that is compared to what you're currently paying, remember: 113,998 square miles.

This became a particular problem for me when I was trying to set a scene in my new novel in a part of Arizona I'd never visited. I thought I could simply google the place and look up its particulars. I found out that some places are more obscure than others. In this case, the place was the territory through which Indian Road 18 passes, near the southern the edge of the Grand Canyon. I couldn't find photos or maps that gave me enough information to write a convincing scene. So Ernie and I took a 24-hour road trip. We got the information we needed on that trip, but we got more. We found a wonderful spot we never would have visited if it hadn't been for my mission. That place is the Route 66 Roadrunner Cafe, in Seligman. 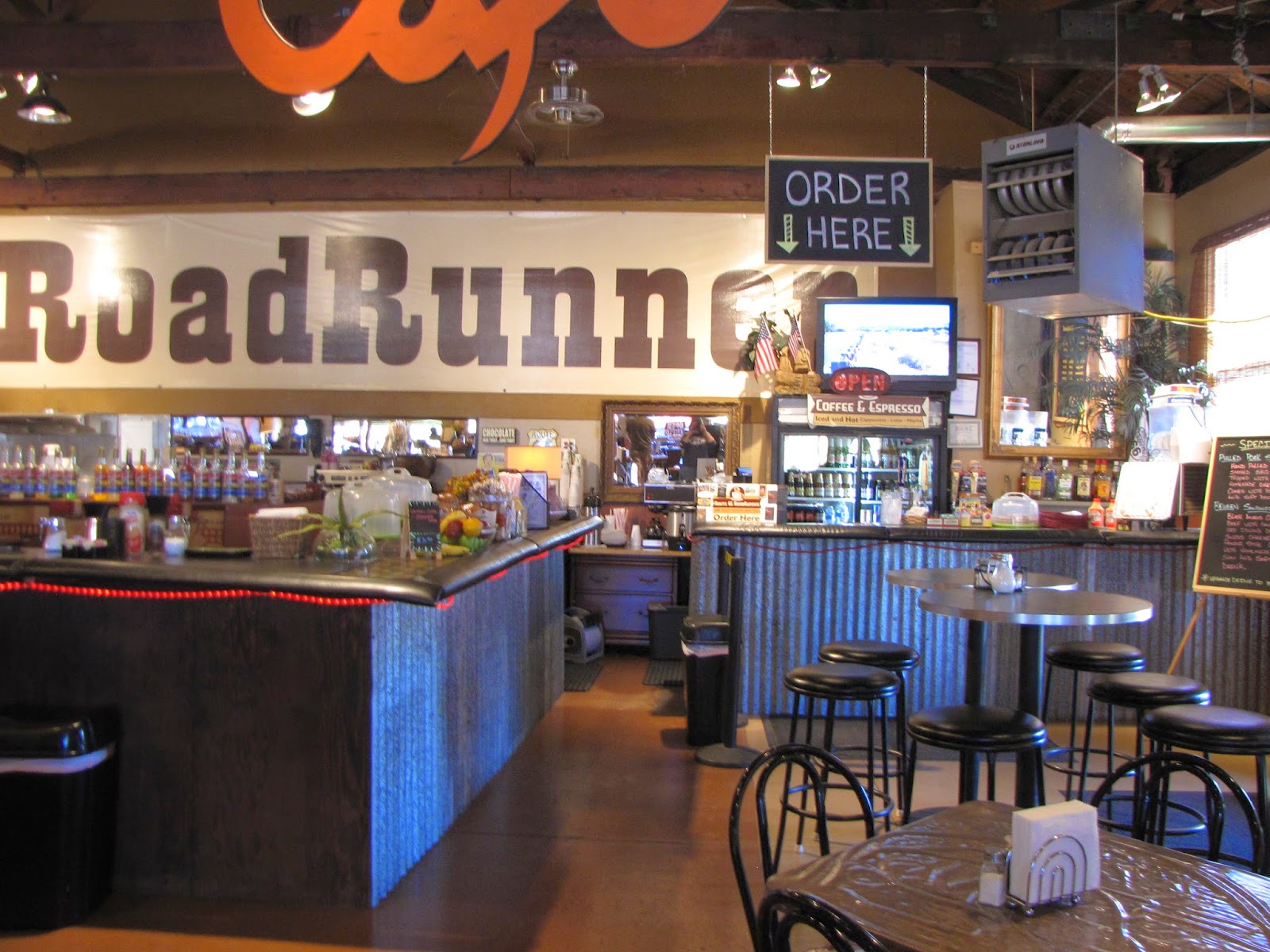 Seligman is an old Route 66 town, one of the places that almost died when I-40 was built to pass it by. (One of the biggest mistakes America ever made was to deal that fate to our small towns.) Seligman enjoys some attention these days from foreign travelers who are enchanted with the old Route 66 mystique. It's a cute little place, population 456 (give or take), with buildings and signs that were constructed in the mid-20th Century. Route 66 is the main drag, so you see lots of signs inviting you to stop, eat, drink ice cold pop (or beer), and buy lots of souvenirs. Ernie and I arrived there at around 9:00 a.m., so what we had on our minds was coffee. Not just any coffee, either – we wanted the fancy stuff. The Roadrunner was the first place with “coffee drinks” in its signs, so we pulled over and went in to investigate. 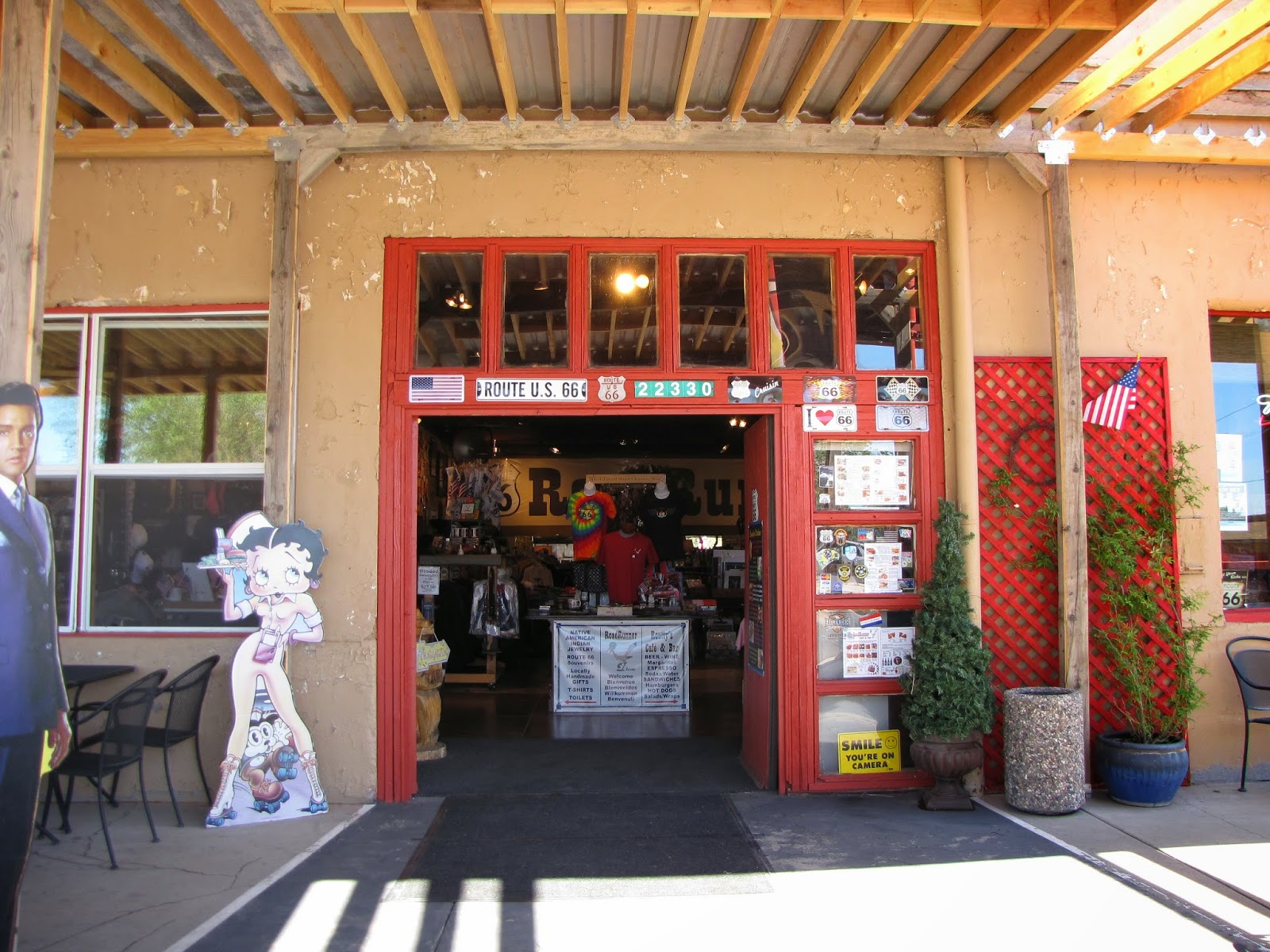 We ended up with a couple of “Fast And Furious” iced coffees, which come fully loaded with 3 shots of espresso. We snagged a couple of muffins too, and scarfed those with a speed and enthusiasm that might have horrified any onlookers, had they been too close. The drinks and the muffins get 5 stars from us, so check the place out if you're passing through. They've got a full menu for lunch and breakfast, as well as plenty of Route 66 souvenirs too, including t-shirts and reproductions of vintage signs. They've even got a bar. The owner let us take some photos, and he's the one who snapped the shot of us at the top of this page, in case you've ever wondered what I and my intrepid partner look like when we're happy. 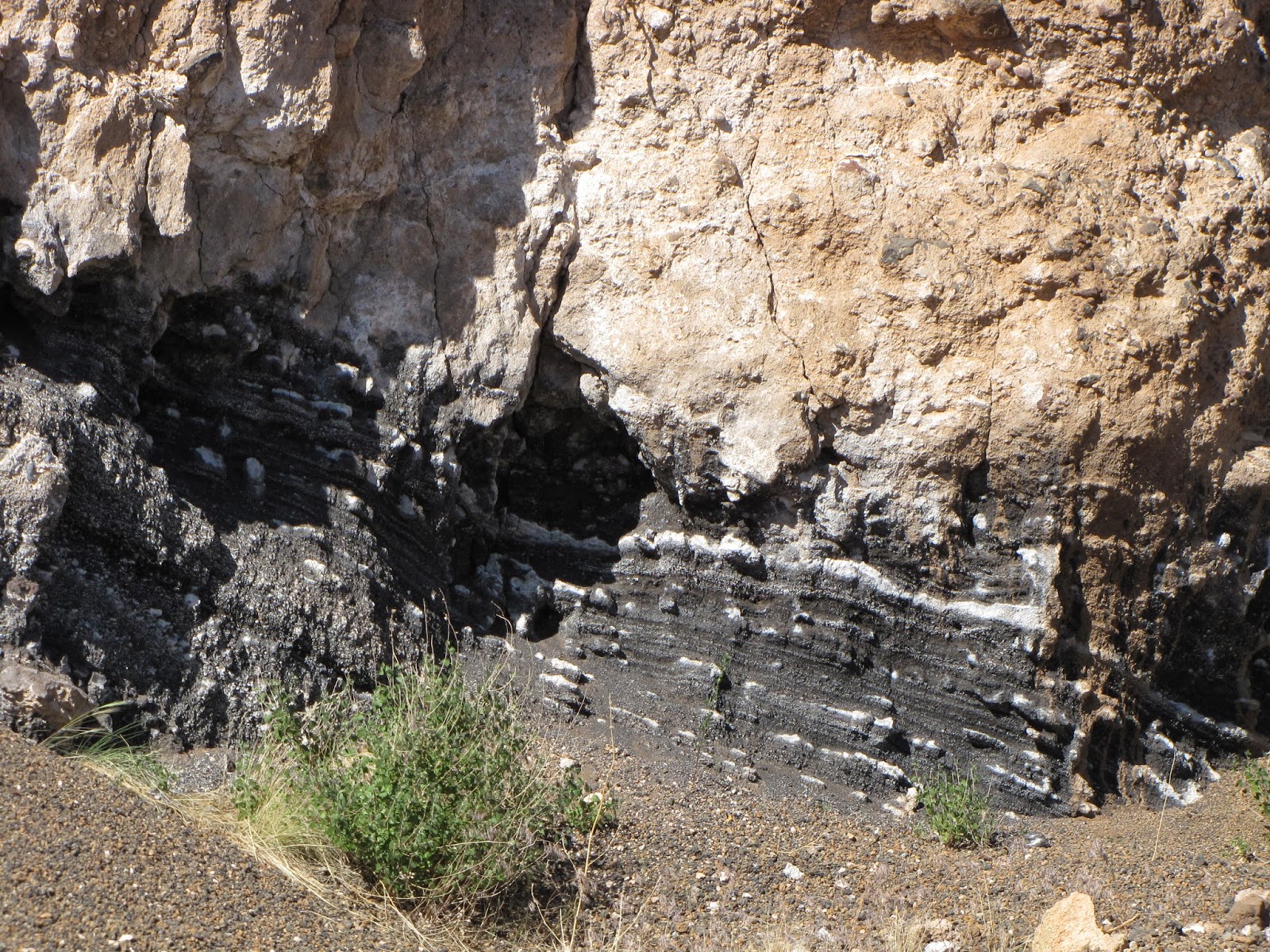 From Seligman, Indian Road 18 is about another half hour's drive on Route 66. The roadcuts on the way reveal some of the most interesting and colorful deposits of volcanic ash and lava I've seen in Arizona. Once you've turned onto 18, which winds through part of the Hualapai Indian Reservation, you climb onto the Coconino Plateau, which is anything but flat on top. It is complicated by its own mountains, hills, arroyos, and valleys. The road is paved, but not fancy or new, and the speed limit varies as you go along. You have to watch for cows, too. It's 60 miles long, and on the map it just seems to end for no particular reason, not far from the south rim of the Grand Canyon. But there's a very good reason for it to end. It's actually right at the edge of the canyon, on a little piece of land that belongs to the Havasupai Indians. They use it to transport supplies in and out of the canyon (via a small helicopter) and also lead horse- and mule-tours into the canyon itself. 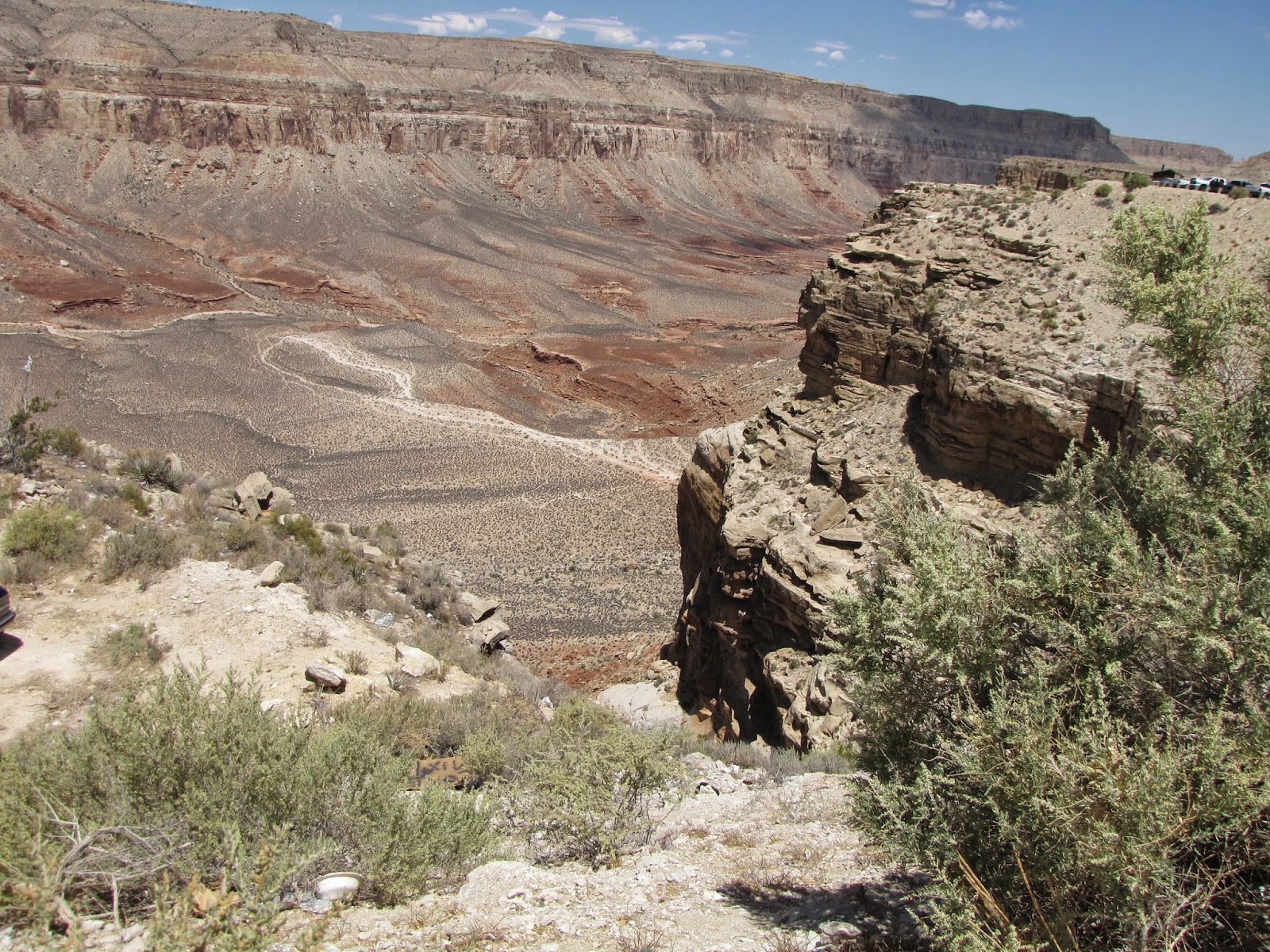 A small tributary canyon runs along the west side of the final mile of Indian Road 18. There's a spot at its head where you can tell a waterfall forms when it rains. The part of the Grand Canyon this little tributary leads into isn't the grandest part – the walls aren't as high or the canyon nearly as wide as you'll find it in the national park (the eastern end), but it's beautiful, displaying uniquely eroded areas of the Kaibab limestone, the cross-bedded Toroweap and Coconino sandstones, the Hermit shale, and maybe even a bit of the Supai layer, at the bottom. It was a part of the Grand Canyon I'd never seen, and the journey up that road helped me immensely as I tried to envisage the scene I wanted to write. 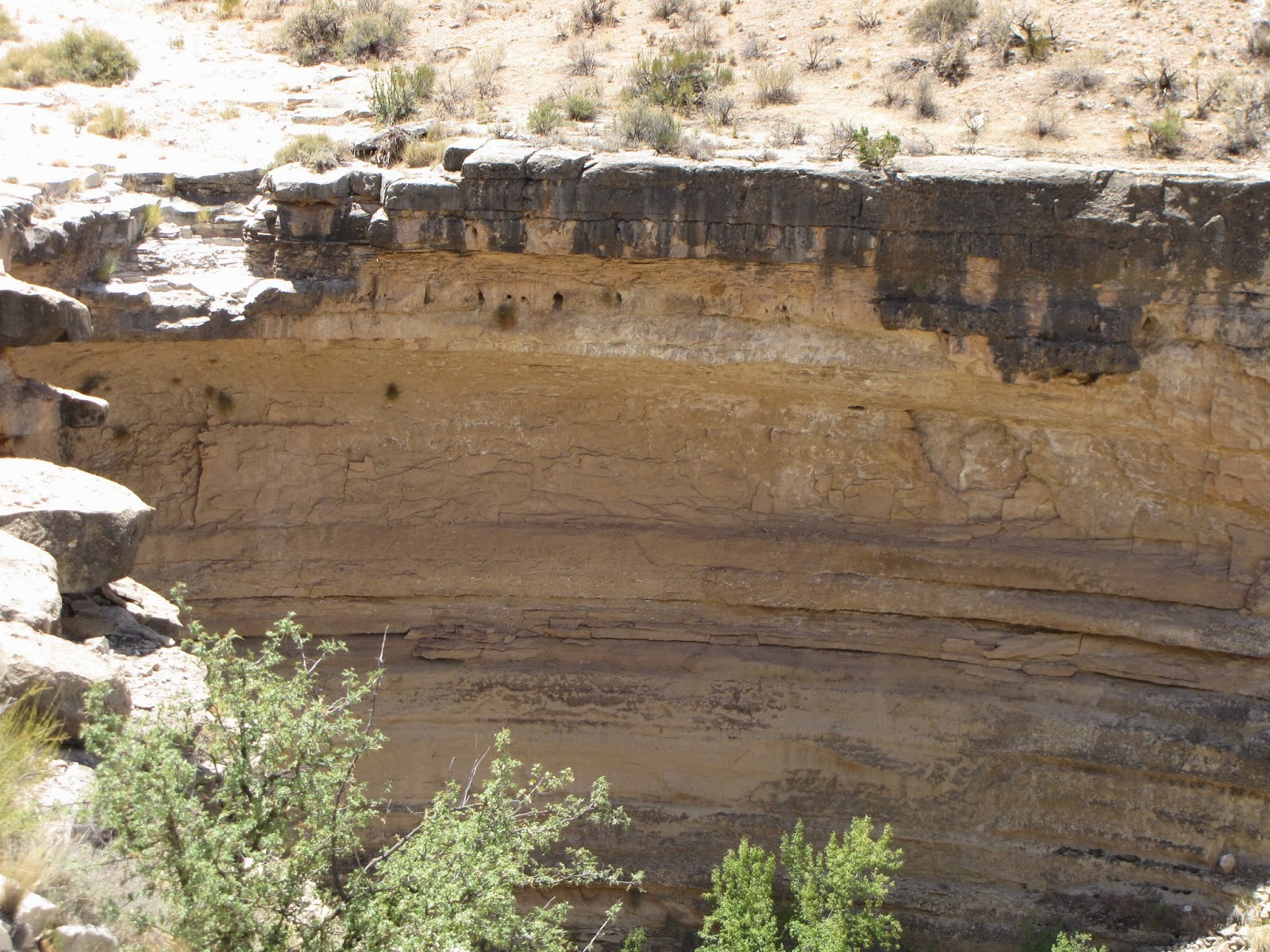 That expedition was the sole reason for our trip, so we had to head back to Phoenix once I'd snapped some photos. On the way, however, we had to make one last stop – at the Roadrunner Cafe for two more “Fast and Furious” coffee drinks. The car needed gas, and so did we . . .

HWY 89 took us back through the Bradshaw Mountains (with a quick stop in Prescott for supper), to Route 93, past Wickenburg and back to Phoenix. It was a beautiful trip, and possibly the only one we'll be able to afford this year. But we made it count. If you're passing that way, I hope you do too. 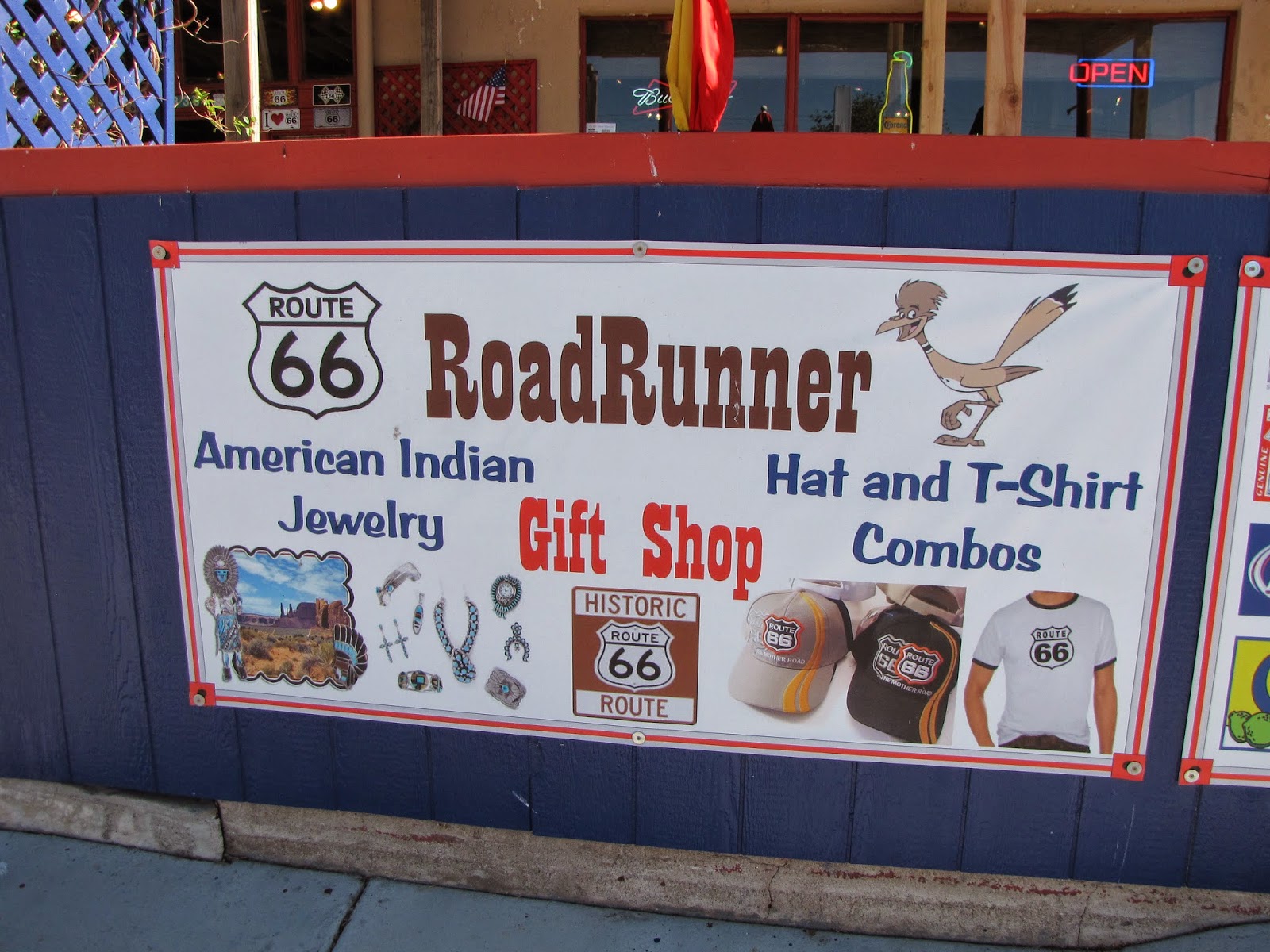 Posted by Emily Devenport at 10:57 AM