In an Ancient Roman Garden (But Without the Cactus . . . ) 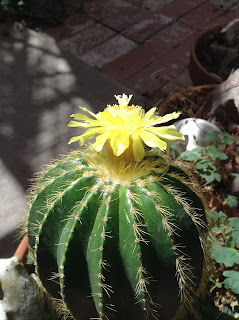 Michael Levy has a new single to buy! Follow the link to get your copy . . .

In an Ancient Roman Garden

I am pleased to announce the release of my new ancient Roman-themed single, "In an Ancient Roman Garden"!

In this project, it was my aim to attempt to recreate an evocation of the lost serenity of Classical antiquity...

This single features a completely spontaneous improvisations for chelys (tortoise shell form) lyre, recorded, live in my own garden at the height of Summer, with nothing but the soothing, timeless background sounds of flowing water and birdsong.

As usual, as an independent artist, without the benefit of a record company to promote me, each and every new album review or blog post about my musical mission to reintroduce the beautiful lyres of antiquity back into the bland modern world, is to me, literally a 'libation to Apollo' - many thanks, everyone, for your continued support!
Posted by Emily Devenport at 10:59 AM