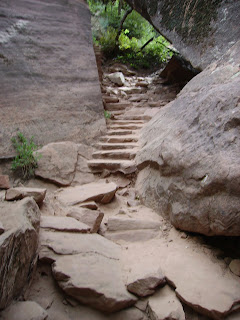 “Wolfy fetches things,” said Ebony, who seemed much more outgoing than Ivory. “What does Brat do?”

Hawkeye scratched the cat between his ears. “Brat is the eyes in the back of my head. And the sensitive nose I don’t have, and the ears that hear ten times as well.” She stared into Brat’s intelligent eyes and thought of something else. “And the point of view I need to put my feet on solid ground.”

Brat gave her a slow blink, as if to say, Of course!

How did I ever get along without you and Wolfy? she wondered. How could I stand to lose you?

But that was not something she could bear to think about as they sped South on I-1. Once they crossed The Break, it seemed far too likely she could find out how.

They drove for five hours, pulling into rest stops along the highway at regular intervals. It was at one of these stops that Hawkeye learned something new about Neighbors.

Adult humans tended to maintain a polite distance from the Neighbors once they got a good look at them, but small children couldn’t resist coming over to pet Wolfy and Brat. The Neighbors let them, even spoke to them gently, answered their questions about the doggy and the kitty. The Neighbors seemed almost equally interested in the children, though Hawkeye wasn’t sure why she thought that. They weren’t acting overtly affectionate or curious, at least not in the human sense. Maybe it was just that they answered questions so patiently, never assuming the children wouldn’t understand them. Maybe it was their tone of voice, which differed noticeably from the one they used with adults.

Finally, just outside of Middle, the biggest town on the North side of The Break, a little girl asked Ebony, “Why does the doggy have to wear those straps around his body?”

“That’s a harness,” replied Ebony. “It keeps the doggy secure. If he got scared, he could wiggle out of a collar, and he might run onto the highway and get hit by a vehicle. But with this harness, he stays right here where I can protect him.”

“Why would the doggy get scared?” asked the girl, who looked seven or eight years old.

“He might be startled by a loud noise, or by another doggy who barked or tried to bite.”

It wasn’t until they all climbed back in the van and they had re-entered the sparse traffic that Hawkeye remembered the little girl’s questions: Why...? Why...?

She asked it twice! Why! And Ebony answered her both times without hesitation, with none of the outrage that Neighbors usually demonstrated when adult humans asked Why? And now Hawkeye couldn’t ask him, Why not?

She felt sure she had never read anything to indicate Neighbors would answer a child’s Why. Maybe she was the only one who had ever noticed. Or maybe anyone else who had noticed just assumed the Neighbors were more inclined to be patient with children, because their questions were innocent.

Maybe the ambassadors humans had been sending to Neighbors were too old for the job. Or perhaps they should be taking their children along to the meetings. Children and assistance animals. Hawkeye ought to mention that in her report . . .

She became so involved in this imaginary report, she didn’t notice the miles slipping by, the signs of human habitation becoming sparser, until she woke from her revery with a start to notice that the sun had descended halfway to the horizon and now the Interstate stretched through a wasteland.

Hawkeye stared out the van window, her perfect vision recording details that would have been missed by most others. She saw sparse scrub and cracked earth, seared by the hot season. She saw small rodents nibbling on seed bundles at the tips of dry twigs. She saw an otherwise empty landscape that seemed to stretch forever. Looking intently into the distance, Hawkeye couldn’t focus on the lone figure standing on the side of the road until her window framed it, and the world froze around her.

Caught in that motionless frame, Hawkeye focused her gaze from far-seeing to close, and the blurry figure became solid. Yet somehow it remained shadowy, featureless, except for eyes that trapped her in its dead regard.

“In Evernight,” whispered the ghost, with a woman’s voice, “closing doors and the waiting. Have the pills running up stairs? Things are here and taking for the Wolves, hear the lark ascending. The Loops and loops the loops, so through-and-through, speaking Spirits of Glory with Dagger. Quiet, Hawkeye! Be quiet . . .”

The world jolted forward again with an explosion of movement and sound, and Hawkeye drew a breath to tell the Neighbors about the ghost.

Then held it. Quiet, Hawkeye, be quiet!

In all its baffling ramble, that had been the ghost’s clearest piece of advice. Or was it clear at all? Did it really mean that she shouldn’t tell what it had said, or would silence serve her better further down the path?

But inside that tangle of words: speaking Spirits of Glory with Dagger. What dagger? The sort that stabs? Hawkeye drew another breath and said, “Boss –”

But stopped when Brat bit her thumb.