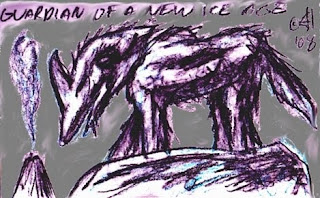 Hawkeye had never seen a god close up, though she had glimpsed one from a bus window once, on the way to college from her dorm. She went to Port University in Sky Perch, a city built on the sides of the biggest mountain range on Jigsaw, and as the city bus crawled up a winding road, Hawkeye spotted a giant nest on the opposite side of a gorge. The creature in the nest locked eyes with her, spreading great, golden wings when it saw her. “No more!” it cried with the voice of an eagle, opening wide its beak. But the amber eyes that looked into hers were humanoid, and it flexed the hands that sprouted where talons should have been.

Funny, that was the day she had broken up with Bertie.

“Why should you see a god?” he had asked, with a tone that implied not so much that she was a fool, as it did that everyone but Bertie was.

“Why should anyone?” she replied.

Gods showed themselves to people for their own reasons, and though they were often plain in their speech, making demands or delivering warnings, their remarks could sometimes be as baffling as ghost poetry.

“I suppose you felt transcendent when it gazed into your eyes,” mocked Bertie.

“I felt awed,” said Hawkeye. And terrified, she didn’t add.

“Lots of silly people feel awed when they catch a glimpse of a raptor. Did you bring that research paper I needed?”

She had. She had done several of his papers for him, based on his notes, because he had convinced her he didn’t have the time to do them himself, though he was certainly smart enough to, certainly a good enough writer, but his time was too precious for that kind of nonsense. “You have plenty of inclination to sit in one place, my pretty little gimp, while I network for the both of us. Deal?”

How she could have viewed pretty little gimp as an endearment, Hawkeye could no longer fathom. So that day, when the god had screamed, “No more!” Hawkeye took it as advice, whether it was meant that way or not.

Bertie’s expression didn’t change, possibly because it never did. Bertie’s sky-blue eyes always mocked the world, his perfectly-chiseled mouth curling naturally in sarcastic lines. He didn’t say a word when she defied him for the first time ever. He simply turned and walked away. He never spoke to her again, or acknowledged that he had ever called her his girlfriend.

Broke up with Bertie, indeed. For two years she had watched him anxiously for the slightest evidence of his regard, hung on every word that had seemed remotely affectionate, nursed emotional bruises inflicted by his casual cruelties. Broke up with Bertie. Say rather that she stopped providing what Bertie had wanted from her in the first place – well-written research papers. Once she was no longer useful, he stopped expending what little energy he had needed to keep her hanging.

But after all, it had been her decision. I didn’t have time. If she had been his willing dupe for two years, in the end she had been unwilling. And that was that.

No more! cried the god, though it may have simply been expressing annoyance with noisy buses. Gods could do miraculous, scary, sometimes destructive things. Gods had moved mountains and rivers on Jigsaw, rearranged whole city blocks, caused unfortunate persons to fly right off the face of the world and out into space. And of course, the Southern gods had broken the Interstate and caused everyone in the South to vanish. No one saw them do this, but the Southern gods had appeared in record numbers to Southerners and mentioned the new Interstate in agitated tones.

“You can’t do that, undo it!” said a god with the head of a woman and the body of a dog.

“It goes across from end to end,” a god with spider legs complained with three of its seven mouths. “End to end is out of line!”

In one week, over 200 encounters with Southern gods were reported, and all of them mentioned the Interstate. “What are we supposed to do about it?” asked officials. “Tear it up again?”

Then, poof. The Southern gods did it for them.

The gods of the North had never complained about the Interstate. But no one doubted they could do to the cities of the North what had happened to the cities in the South. So people tried to do what the Northern gods asked, after the Disappearance. Sometimes they asked for strange things, but they never asked for something impossible.

Ghosts never asked for anything. They didn’t have much physical impact on the living world either, except occasionally as poltergeists. After Hawkeye moved into her home, a poltergeist kept throwing her books across the front room. It favored one book in particular, The Lost Cities, which contained photographs of the empty Southern cities taken by investigators just after the Disappearance. Each time the poltergeist threw the book, it fell open to a different city: Lark, Seaside, Evernight, Edge, and Farthest. Hawkeye got a chill when she picked up the fallen book to see which silent scene had been revealed. She had studied the book many times before, fascinated and frightened by what she saw there. The poltergeist seemed to have a knack for finding the spookiest photos of all, the ones most fraught with inexplicable menace. She would look and look, trying to see what the poltergeist wanted her to see. Instead, she only felt the mystery loom larger, more unsolvable.

The photo that frightened her the most was one from Evernight. Time fractured in a particular way in Evernight, so it always seemed to be night there. Time inside the Fracture passed slowly but steadily for those inside it, and people outside could only contact them after night had fallen wherever they were. Day never dawned there, and if you wanted to enter or exit Evernight when it was day outside, you couldn’t do it.

Evernight had been built in levels, streets were layered one on top of the other, the buildings all with several stories. If you stood in the Dark Desert, outside city limits, you could see all of the layers. An investigator had taken a picture from the desert of a group of buildings. Hawkeye couldn’t tell if they were residential, or if they had some other purpose. Every door on every level was shut, save one on the seventh. For some reason, the sight of that lone, open door filled her with dread. She had a nightmare about it, in which she approached that open door, but she woke before she could enter and see what was so terrible about it.

A few weeks later, while she was searching through a database of Encounters With Southern Ghosts, she found a reference that gave her a chill. A ghost appeared to a woman whose husband had been in Evernight on a business trip when he disappeared along with everyone else. It raved to her about suitcases and toothpaste, a jumble of complaints that were almost comical. But at the end it said, Levels and levels, and on the seventh the door is open. Go in and look over your shoulder . . .

Had that same ghost visited Hawkeye? Maybe because she couldn’t stop wondering about the door? And she was one of the few researchers who had the stomach to examine the Southern Ghost database thoroughly. Somehow, that bit of ghost poetry felt like an explanation, possibly even a warning. It lurked in the back of her mind, ready to be examined again.

Hawkeye suspected the Neighbors knew more about the gods than humans did, but possibly not much more. Even the Neighbors had been surprised when the Southern gods took such extreme action because of the Interstate. Hawkeye often wondered if the Neighbors were angry about what had happened, though her studies had revealed only puzzlement from them. The Neighbors never said whether they had lost anyone in the Disappearance. No human on Jigsaw knew where the Neighbors lived, they only saw Neighbors who wanted to be seen.

However, every human on Jigsaw knew where Neighbor ghosts could be found. In the South, on a plain near Farthest.

This was the only place. Neighbor ghosts weren’t like human ghosts, except for the fact that they were dead.

-from Spirits Of Glory by Emily Devenport

Posted by Emily Devenport at 10:13 AM